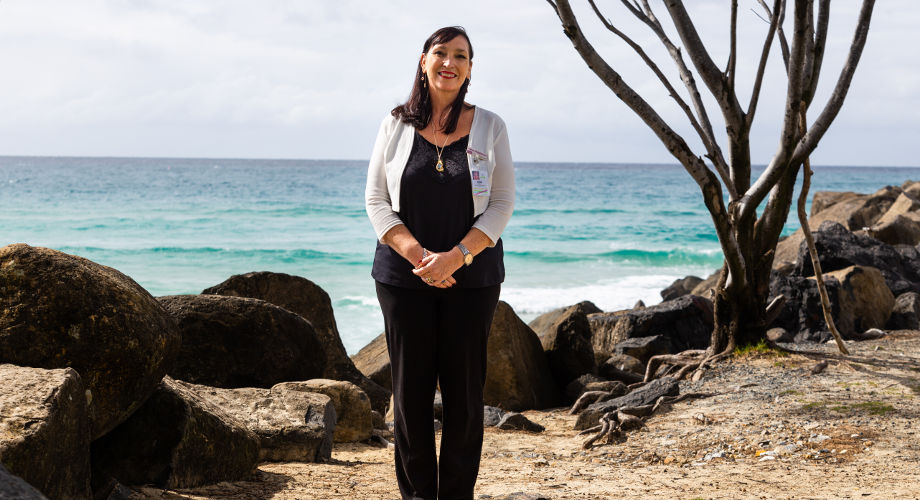 As life experience goes, Jane Middleton has seen more than most. From hospitality to aged care, and from motherhood to a brain tumour, she’s had quite a journey. She shares how her experiences have shaped who she is today, and why she’s giving her all at Feros Care.

Jane Middleton left school at 15 with no qualifications and a hunger for something new. Born in Middlesex, England, she left home at 16 and moved to the US to be a nanny. She then spent ten years in hospitality, where she met her husband. They later started a family and entered a period of serious juggling.

“We both continued to work and for about four years, it was crazy. Each day at 5am, I used to open up the village shop and organise the paper boys. Then I’d head back home so my husband could go to work. I ran a childcare business during the day, and then worked in the pub at night.”

It was far from a balanced life so in 2006, they made a radical change.

“My husband was a chef so he was hardly home, and people thought I was a single parent! It was too much so we decided to up sticks and start a new life in Australia.”

They settled on the Gold Coast, where they still live today. Jane worked firstly in real estate (It was cut throat and not at all me), then recruitment, where she also had mixed experiences. She finally secured a more fulfilling role, in the disability space, doing rosters and orientation training. It was during this period of change and challenge, that tragedy struck. Twice. In 2012, Jane lost both her parents in a car accident. Then in August 2013, her doctor discovered she had a brain tumour. Jane reflects on that time with typical stoicism.

“It was harder for those around me than it was for me. You just get on with it and do what you need to do. I have a titanium skull now! It’s a kind of metal mesh across the back of my head. My son says it’s like Crimsafe!”

Jane says her employer at the time was incredibly supportive when she had to undergo surgery, and that this made a huge difference to her. She clearly felt happy working in disability. However, her role later became redundant, so Jane found herself again considering her future. Then she got a call from Feros Care.

Jane joined Feros Care in 2016 as an Aged Care Rostering Team Leader, before returning to disability as a Local Area Coordinator when Feros gained a partnership with the National Disability Insurance Scheme (NDIS). She loved her job but then an opportunity arose for a training role. The chance to beat the odds and turn her own lack of formal qualifications on its head was too good to pass up.

“I was always really keen on the idea of helping others succeed and grow. To be honest, I didn’t think anyone would touch me for that sort of role – I had no diplomas or certificates - but I felt I had to at least apply. Feros gave me a shot and that’s what I’m doing now!”

Now three and a half years into her Feros Care journey, Jane is loving life. She has already had a positive impact on hundreds of Feros Care employees, travelling across the country delivering orientations and an ongoing company-wide training curriculum. Meanwhile, she has also undertaken some development of her own.

“It took me 50 years but I’m now a qualified trainer! I’ve actually completed two formal qualifications since I’ve been here – the first two of my life!”

I ask her how it feels.

“It’s a huge thing for me. My husband says I’m a different person, as I’m so much happier and confident in what I can bring to the company. It’s silly, really. You can have so much talent but not everyone has it written on paper. There’s a lot to be said for life experience and being a decent human. Still, I’m very proud.”

It’s enriching to sense that after such a challenging journey, Jane finally knows her worth. She’s fulfilled by the great feedback she gets from her trainees, and she says she’s even had nice things written about me on the toilet wall - at Feros Care, employees can ‘graffiti’ positive feedback in this way.

Jane is an enthusiastic advocate for her employer. She speaks fondly of the Head Office where she’s based – a place where everyone gets the same treatment and where the CEO’s desk is right in the middle of the office, among everyone else.

“Everyone cares about you as a person; you don’t get that very often. We laugh every day and we like spending time together. Today I got an invite for drinks ‘because it’s Thursday’… and my god, the amount of food these people eat!”

It’s fantastic that Jane takes ownership of her wider contribution to Feros Care.

“We bring the culture every day; it’s not already here. It’s up to you to make a choice how you’re going to behave and what you’re going to bring. Life has taught me to be so grateful for the people around you and for being alive each day.”

Jane’s story serves as a powerful reminder to employers. When you connect with and empower your people - when you embrace their journey – you’ll be repaid with performance and impact.

“Feros have helped me grow. When you feel valued and cared about, you want to give as much as you can. I work hard to support people and love seeing the results. For example, I’ve seen people cry because IT and computing are so daunting to them. And we’ve turned it around. Here, I feel worthwhile.”

About our People Stories Series

Storytelling is fundamental to Employer Branding Australia’s work and philosophy. That’s why we created our very own People Stories Series. We’re proud to bring you stories about the incredible things that happen when good, talented humans truly connect with their chosen employer. Follow Employer Branding Australia on LinkedIn or Facebook to see the stories live in your feed.