The Housekeeper Who Makes A Place A Home 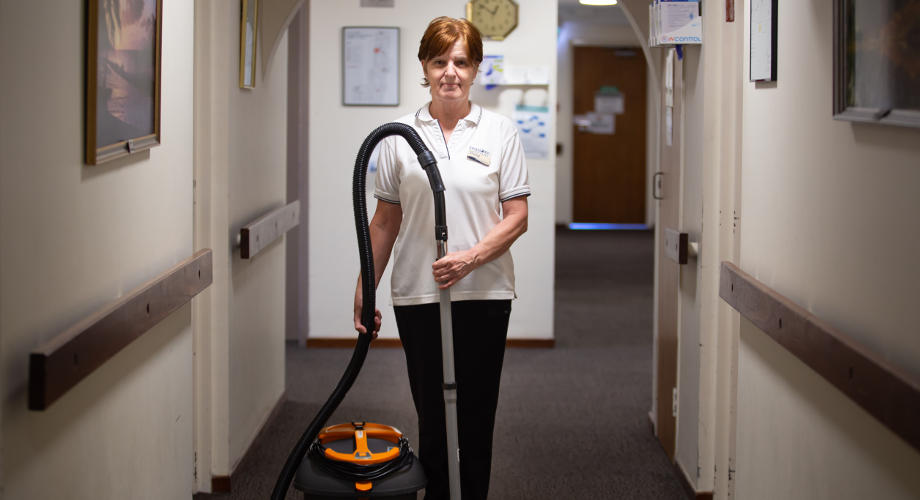 Meet the quiet, no-fuss aged-care cleaner who is so much more.

The day I meet Sherryl Edwards, I’m hiding some letters in my bag. They’re written to her by her colleagues, at my request. SwanCare’s Housekeeper of 17 years has been chosen to feature in a video I’m co-directing about unsung heroes at the Perth-based aged care and retirement living provider. We plan to surprise her the next day with some messages of thanks from her team and managers. I’ve read some of them already. They speak of a highly-valued quiet achiever who can always be counted on... of a truly thoughtful woman who goes above and beyond for SwanCare’s residents and their families.

With that in mind, I head to SwanCare’s Waminda care facility to meet the woman herself. The person I find is exactly who I hoped she would be.

A woman of few words

We take a seat in the staff room and as Sheryl nibbles on a sandwich, I ask her why she chooses SwanCare. Her quiet reply is brief:

I nod and wait for her to elaborate but nothing happens. I ask her to tell me more, perhaps about the residents to begin with.

“Well, you know, I like to be there if they need anything, and to keep a clean environment.”

Sherryl, I realise, is a woman of few words, who does not like talking about herself. After a mildly awkward silence, she suddenly speaks again, and our conversation begins for real.

“I like listening to their stories. I think that’s important. Older people have things to say but they can get forgotten nowadays. That shouldn’t happen.”

The conversation opens up from there... still quietly and at times with more of a trickle than a flow, but gradually, I uncover the story of this cleaner who cares.

A cleaner who cares

Sherryl Edwards is ‘Perth born-and-bred’. She has worked in housekeeping her whole career and joined SwanCare in 2002. Now 17 years on, the mother of two and grandmother of five still makes the daily trip from her home in nearby Huntingdale to direct the work of Waminda’s housekeeping assistants.

It’s clear that Sherryl’s contribution goes well beyond cleaning rooms. She’s too modest to tell me herself but I’ve already learned from her colleagues’ letters that she consistently goes out of her way for residents and staff. She’ll stop and extend a helping hand or a calming voice, whenever it’s needed. And she notices the small things that others might not, which is a valuable trait when working in aged care. The impact of her presence is articulated perfectly by Fiona Millar, SwanCare’s GM - People & Culture, whose mother-in-law happens to be a SwanCare resident:

“So much of what Sherryl does could go unnoticed. She just knows the residents so well and gives a lot. Although Mum has dementia and suffers memory loss, she always knows who Sherryl is and is happy to see her. That means so much to me.”

Connection is clearly a prominent theme at SwanCare and Sherryl reveals that this can also be a challenge:

“You build such strong relationships here, and you get very attached to some of the residents – they become part of your family. It’s hard when their health deteriorates or they pass away.”

I ask her how she copes with that and she looks me straight in the eye:

Stoic though she may be, Sherryl shares that it’s during moments like these that a close team is very important.

“There’s four people in my team - Duda, Patricia, Kidist, and Sherryl. Plus our supervisor, Kaye. We all get on really well. I’ve worked with Duda for eleven years and we’re good friends. We eat lunch together each day. We help each other.”

For some reason, that name means something to me.

As we end our chat and Sherryl goes back to work, I pull the letters out of my bag. There it is, the fourth letter written to surprise Sherryl tomorrow.

When I come to work and I see your car, I feel relieved. I know it’s going to be a good day. I know everything will be fine because you’re here.

About our People Stories Series

Storytelling is fundamental to Employer Branding Australia’s work and philosophy. That’s why we created our very own People Stories Series. We’re proud to bring you stories about the incredible things that happen when good, talented humans truly connect with their chosen employer. Follow Employer Branding Australia on LinkedIn or Facebook to see the stories live in your feed.